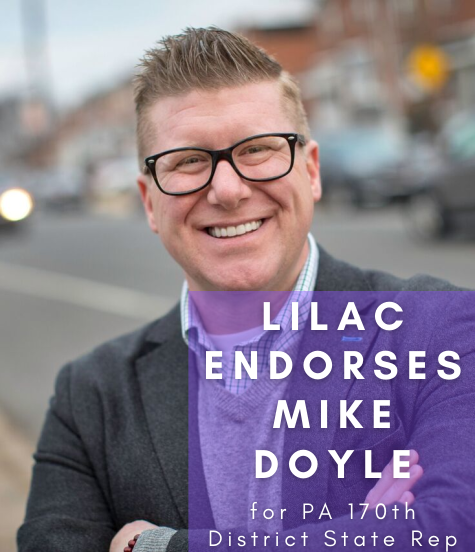 Lilac is excited to announce that our membership endorsed Mike Doyle for State Representative (170th State House District)! Mike is running a campaign built on policies that will bring real change for the multiracial working class like single-payer healthcare, the Pennsylvania Green New Deal, worker’s rights, and ending Mass Incarceration. Mike is a dedicated activist who went to North Dakota to fight against the DAPL, was arrested during the Poor People’s Campaign, and went to Houston after Hurricane Harvey to help them rebuild.

“Mike Doyle shows up. When I was organizing with the Pennsylvania Poor People’s Campaign in 2018, we were in Harrisburg together fighting for key issues like healthcare and the environment. In the tradition of the civil rights movement we did civil disobedience together. He’ll be great for the Northeast.” - Dave B.

His opponent, Martina White, is a racist, authoritarian Trump Republican who has made crackdowns on our immigrant neighbors and funding cuts for sanctuary cities like Philadelphia a core part of her political agenda. She repeatedly attacks the BLM movement by calling protestors “criminals who create chaos and prey on fear” and pushing the PPD to have more aggressive responses to protests. White also voted for Medicaid cuts, exempting oil companies from having to report spills, and taking money out of poor school districts.

Especially in the era of the pandemic, we need representatives like Mike to oppose austerity and advocate for real change in Harrisburg. Supporting his campaign is part of Lilac’s strategy of promoting progressive candidates and opposing fascism in our city. Sign up to volunteer here and help elect Mike to PA’s House!