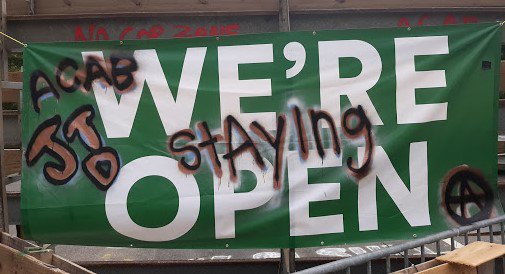 Mayor Kenney and his allies in the PHA have been desperately trying to clear out three homeless encampments around the city. After narrowly losing an injunction from a federal judge, the city moved to evict residents of Camp JTD on September 9th. However, the organizers and residents stood strong and forced the city to back down. The encampment’s press release on September 10th made it clear that they’re determined to win.

“Mayor Kenney says that this encampment is unlike any other encampment the city had to deal with and that’s true. It’s true because this is not just a homeless encampment… This is a protest. This is a statement. This is an indictment on the city’s 100 year failure to deal with chronic homelessness in this city.”

After his failure to break up the camp, Kenney took to lying instead. He claimed that the encampments were a danger because of the coronavirus even though the CDC says it’s much more dangerous to disperse them. Now Kenney is trying to convince people that the camps are violent and resisting communication with the city, but the organizers have invited him to come talk which he’s declined to accept. The city even went so far as to add an option to 311 to report the encampments for nuisance violations; no surprise when the surrounding neighborhood is incredibly wealthy and 91% white in the poorest large, and majority-minority, city in America.

The people living in the camps have been open with their stories. The city’s shelters are not safe and expose people to bedbugs and food poisoning. The encampments on the other hand provide tents, good food, clothing, and the ability to social distance. Lilac and the Philadelphia Rent Control Coalition believe that the residents of the camp have the right to do what’s best for themselves. Check out our statement of support! Follow them on twitter @ https://twitter.com/PhlHousing for updates on supplies needed and how you can help.